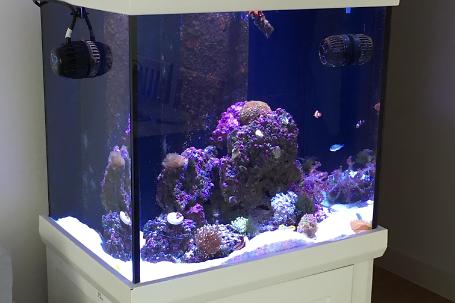 Been into the hobby now for about a year, started with a small freshwater tank but soon after I wanted bigger and better and a greater challenge so I got my first marine tank this Aqua Reef 195 cube. The plan is to keep a small number of fish and create a natural looking coral reef. 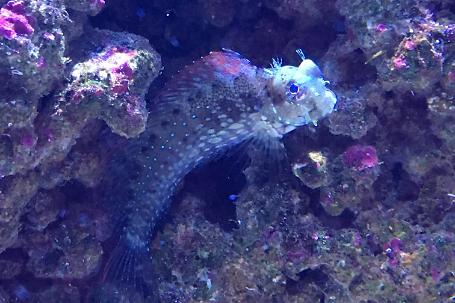 I use live rock in the display tank and sand for natural filtration. I also have a Bubble Magus Curve 5 protein skimmer in the sump. I also use Seachem PURIGEN in the sump to deal with any excess Ammonia, Nitrites and Nitrates. Though before I used this I only had slightly elevated levels of Nitrates which is fairly common in young tanks.

For lighting the tank I use a single EcoTech Radion XR30w Gen 3, it has about 8hrs of daytime lighting and 4 hours of moonlight. This insures a consistent schedule mimicking the natural environment.

For water movement I've got a Maxspect Gyre XF150 mounted horizontally on the right-side of the tank. It's configured in the A-A alternating flow configuration with it set to reverse every 5 minutes. The are few dead spots in the tank and good amount of random movement.

I've got a Christmas Wrasse who is very attractive, two Blue Cheek Gobies which are paired and are real characters though they do tend to make a mess. I've also got 5 Chromis who tend to shoal together, these were the first fish I got along with two young Clownfish.

The only thing I'm currently dosing is Iodine as this has been recommended to improve growth rates for soft corals but the jury is still out on this one.

I plan on getting an automatic dosing pump when I attempt more LPS, SPS corals but for now I'm not dosing anything extra as most nutrients are already in salt mix.

Covert 7
Tend to feed frozen Mysis Shrimp and pellets as well as flake food. The corals also get a feeding of Covert 7 (Phytoplankton , Zooplankton) once a week.

On average you perform a 13.4% water change every 7 days.

Inspiration comes from mature reef tanks that I constantly photos of on user groups which are just stunning. I can only hope to have a tank half as good one day. My goal is take one day at a time, research and go slowly and learn from my mistakes. Read lots and try to understand the natural reef, maybe even visit one one-day.

And of course go bigger and bigger, already planning a 4-foot tank.

Research, ask questions, don't rush to shop and buy fish without understanding what you're getting, make sure fish are suitable for your tank, don't always believe what your LFS is telling you most are trying to make money. Things will go wrong and when the do don't be disheartened just learn from your mistakes and move on.

Always buy the biggest tank that you can afford and make sure you have space. Starting off small can actually end up costing most as you'll soon want to upgrade. It's also easier to maintain levels when you have a greater volume of water.

No disasters, only regret was not being a part of a community before I bought my fish tank, as there are so many deals to be had as people are always breaking down their tanks and selling stuff off cheap. I spent a lot of money to get a smallish tank setup.

Don't buy a Bicolor Dottyback! Nightmare of a fish, attacks everything, I had to remove all my live rock and fish to catch the little bugger. Don't be fooled by it's stunning appearance, it will dominate your tank and all your other fish will be stressed out and have very little territory to feel safe in.