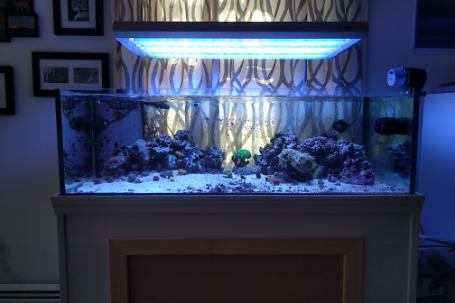 I've been in the hobby now for about 8 years. I started with a 29 gallon with a small Aqueon sump and Fluval canister filter. That tank ran for about a year before I started planning a bigger tank. I had begun building a custom stand for a 55gallon that I picked up. I learned a lot about building with wood that I never had really done before. Unfortunately, after getting the tank wet and starting the cycle process I had to move to a smaller apartment in the city and restart the cycle again with new sand. With the process of DIY LED lights, DIY Bean animal overflow and DIY 20 gallon sump I soon realized that I may have gone overboard and never really had that great of success for what I wanted to achieve.

I finally started looking on to my next move. This time around I wanted to plan twice and buy once. I can't say that I have completely followed my plan for various reasons like budgets, space, and vacation issues but every week I have been learning more and more about the hobby and am starting to get to the point of having my dream (for now) tank. 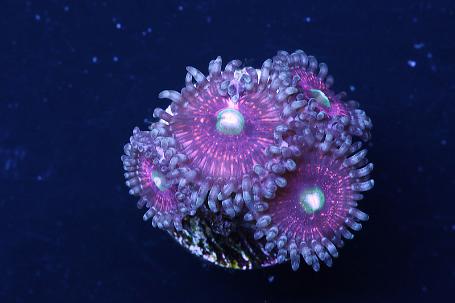 Started planning this tank in February of 2015, found the tank at a somewhat nearby LFS and pulled the trigger over going with a cube tank. Decided that the shallow rimless look was the kind of lookI liked the most.

The second time around of building a stand I planned things out much better. I wanted it to not have a ledge around like my old tank, be big enough to hold as much as possible, be white for a better aesthetic, and just have enough room if I wanted to upgrade or get some new equipment. After a week or so of cutting wood in an apartment (to the demise of my girlfriend), hammering until 10pm before the neighbors would complain, and painting I had a near perfect stand.

Went from the DIY LEDs to aN ATI Sunpower T5 since they are tried and true. Stuck with my DIY sump but changed the baffles a bit. Upgraded the Protein Skimmer, bought a BRS dual reactor and Jebao dosing pump.

That basically left me to where the tank if today. Have been trying to run SPS but have had no luck even when parameters have been as consistent as ever. Might try it again but for now I am going to focus on happy livestock and keeping coral colorful and happy. 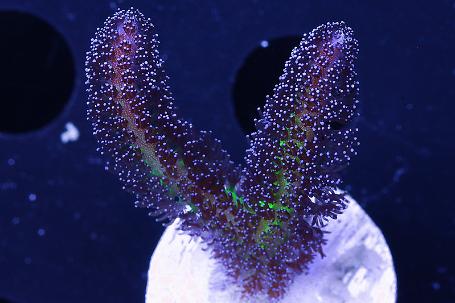 I am currently running a 36" ATI SunPower 8x39W after switching from DIY LEDs that I hated trying to find the sweet spot. Lights are currently ~12" off the water line but really need to get a PAR meter soon to figure out best coral placement. 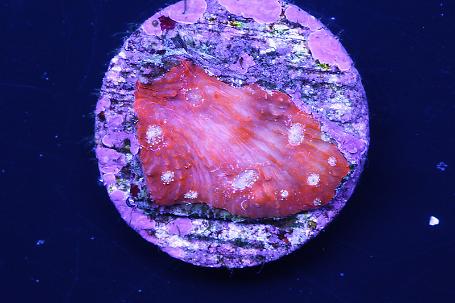 Currently running 2 Jebao RW-8s on full speed on Else mode. Pumps are on opposite sides of the tank and cause a circular water flow through the tank. 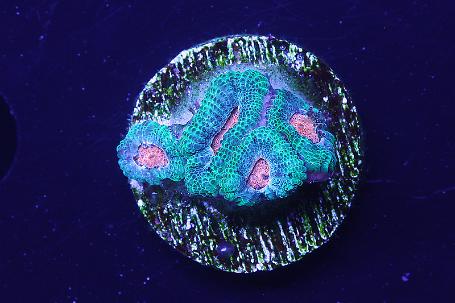 On average you perform a 9.9% water change every 20 days.

My main goals were to have an automated tank that strives. I travel quite a bit Monday through Friday for work so needed to automate things enough that I could leave it and not have everything crash. I want to someday start growing some SPS and have a SPS island and a LPS/Softie island.

There have been many that have inspired along the way for sure. One that stands out the most is from reefer AJ_Tsin in Canada. He has a long running 47g build on NanoReef that is something dreams are made of. I have limitations of space and money so likely will not be running a ZEOvit system like AJ did but his shallow tank is what inspired me to go shallow for sure. 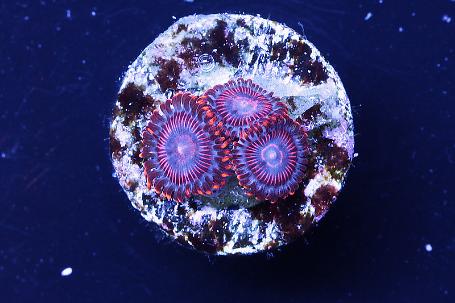 I have had random failures with this tank. Some worth noting:

1. Constant return pump failures. I went cheap and bought a Jebao return pump after having success with their powerheads. Although I loved the speed adjusting, the thing constantly jammed and was nearly impossible to clear without serious muscles while trying to to break it. Ended up trashing it and going with Eheim after, while on vacation of course, the pump jammed and I lost 4 fish and a few coral.

2. I originally got lazy and did not finish sealing the stand. After a few spill I am seeing some warping of the inside floor of the sump. Huge mistake for sure but I am now planning on a new sump (Trigger Emerald likely to come) and with re-plumbing everything I am going to repaint the inside, seal it properly, and lay down a protective coating so that any spills will be contained within the stand like a bowl. Damaging floors in a rental apartment is never a good idea. 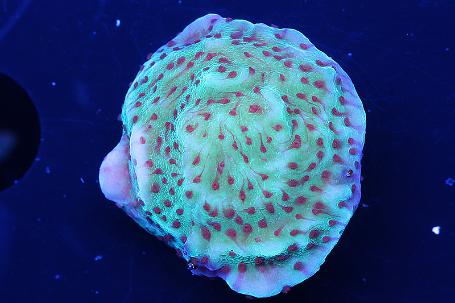