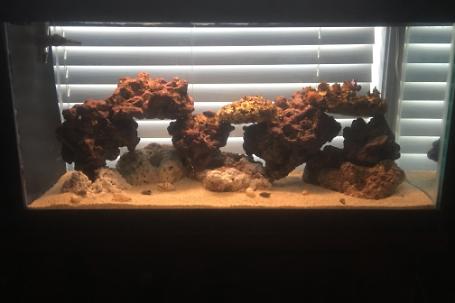 We are Richard and Regina. We have been keeping aquariums off and on for 16 years for him and all of her life. We have a dream of opening an aquarium store down the road, so this is how we'll be gaining knowledge and further experiences.

This aquarium has been many things over the years. It has seen many fish, many styles of setups, it's been a sump, it's housed hedgehogs, it housed a Guinea pig, and now it's becoming a "nano" reef.

My brother from another mother, James, setup his bio cube and it sparked us to get another saltwater tank up and going. Regina loves corals and growing colonies from frags. Collide those ideas and you have the rebirth of this tank. It is in our living room and we did not want to chance having water everywhere. I like the bio cube idea of an all in one, but not the price (especially when this tank and stand were unoccupied). I had the bright idea to see if there were any all in one people out there in DIY land. Our AIO came from there. Always having to be different somehow, our AIO is built from coroplast. It's waterproof, it won't leech anything into the water, easy to work with, and it's cheap.

Once the idea was drawn out for the tank, the cutting and trimming took place. The AIO false wall was siliconed into place and equipment added. Base rock was placed, washed sand added, saltwater mixed and added, then live rock added from another tank, then topped off with more water.

The filtration currently is BASIC!!! There's an overflow in the false wall that utilizes polyester material for mechanical filtration and a maxi jet that returns water back into the display. The live rock in the display portion is the biological and currently there's no need for chemical. The idea is floating around for a diy algae scrubber in the "sump" area down the road if need be.

For now, we'll use an older fluorescent light until we go LED. That is still yet to be determined as to when and which one. The corals she decides on will drive this purchase.

Currently a RIO 1100 is providing the only water movement in the tank. It returns from the "sump" and is proving to be plenty of flow within the display area. A SunSun JVP-110 was purchased at the same time just in case. We'll see if it's needed down the road.

Our inspiration was the bio cube of our buddy James. The AIO idea is awesome and fits our needs for the living room. We wanted rock work that would allow maximum flow, but plenty of places for coral frags to grow. That's the starting goal... grow frags... lots of them.