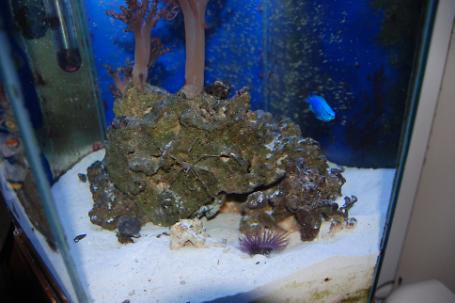 Welcome to Freddy's Graveyard. Freddy was a beautiful purple (Gonodactylus Smithii) that lived in this tank for over 2 years.

Freddy was a beautiful purple (Gonodactylus Smithii) that lived in this tank for over 2 years. Freddy was more than a simple invertebrate he was a very intelligent creature and very interesting to watch. For this reason we keep his tank running and have named it Freddy's Graveyard in his honor.

The name Freddy was given to him in resemblance to "Freddy Krueger" from Nightmare on Elm Street. He had lightning reflexes and very sharp razor raptors. Freddy only once hit me but it was just a light tap telling me to stop moving his rocks around. Freddy was very picky of his surrounding and would not like anything moved or changed.

On average you perform a 26.7% water change every 9 days.