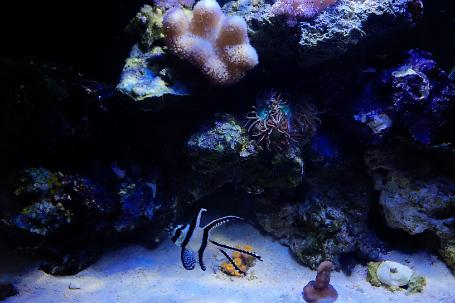 Extremely inexperienced. In fact, zero knowledge on reef keeping until my boyfriend decided to start his nano reef. I became fascinated and started reading away. I was well aware of all the challenges that came along with keeping a nano reef. Nano tanks in general. However, I decided to try anyway after seeing my boyfriend's two gallon take off.

I started out with an 8 gallon all in one Evolve tank. I loved how it was set up. I let it cycle for a good two months. Then added my Bicolor Blenny. Soon after, the Cardnial joined him. It was too small for the cardinal. I understand that the 10 gallon is too small for him as well and he has definitely grown. He seems happy, but I'm sure he could be happier.

The Evolve had a "malfunction" and I had to make a quick change to the 10 gallon. Regretting not getting a 20 gallon at the time as I see now, that I have the room for it. Technically, my current tank started in June. I'm not as happy with my set up in the 10 gallon as I was with the 8g so I probably won't be posting pics until I get it where I want it. I just can't seem to get the rockscape to my liking. For the most part my corals are growing well. With the exception of a few which I will question later :) My fish seem happy and healthy.

I said I was aware of all the challenges, but there are always questions and concerns that I didn't think of before. Perhaps I got too ahead of myself. Perhaps I was too eager. I would say then, "But what's the big deal REALLY?" It is a big deal. The more I learn, the longer I keep the life in my tank, the more concerned I become. The more I want to learn. The more I want to keep everything happy there. 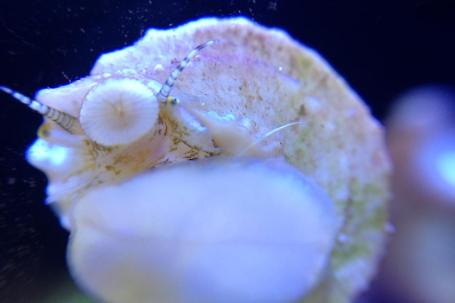 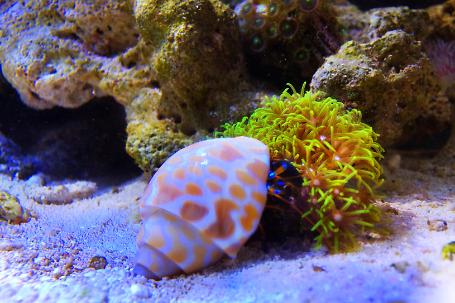 Duncans and Elliot added 6 years ago

I am too timid to try the live rock only filtration method so I've opted for the Fluval C3. So far so good. I use ChemiPure Elite and Dr.'s Foster & Smith Phosphate removal pad as well as the fluval bio media.

Completely lost on my lighting issue. I have the AI Nano Sol and it was perfect for the 8 gallon. On the standard 10 gallon, I'm, well lost. The arm mount that came with the light doesn't fit on a standard tank. And I haven't figured out a way to mount it any other way. I feel that if I hang it, I doesn't put out enough light to the entire tank. That is at 100% on all three colors. I could be wrong. It currently sits on a makeshift stand 3.5" from the tank. And...it's at 95% W, 99% B, and 99% RB.

Considering getting another nano sol and hanging the two. That seems to be the most economical solution over buying what I really would like to have. And seems that it would cover the entire tank while having the option of lowering the intensities. But as my current situation does not give me the leisure to make that purchase within the very near future, I'm hoping to find another solution soon. 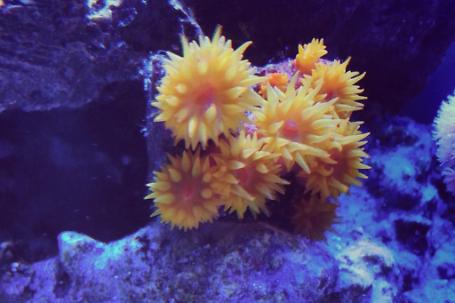 Another area where I am in need of guidance. I am using the Hydor Koralia Nano 240gph. I actually thought it was too much flow in this tank but perhaps it's not enough? I can't seem to position it in an optimal spot. It seems like too much flow when it hits the xenias, or the duncans. And at one time I had it blowing on the gsp and it started "curling" it's polyps' tentacles.

I have the return flow on high from the filter on the left side of the tank. The powerhead I originally had positioned on the right lower back wall tilted up to the water surface. I've since moved it to the right side closer to the surface thinking I needed more surface agitation. But nothing seems as happy as it was before. My xenias never pulsed but they exploded in growth rapidly. But I feel on the lower back wall, the flow from the koralia leaves a dead spots behind the rock work.

A confusing issue for me.

Corals:
White Pom Pom Red Sea Xenia
Green Star Polyps
Sun Coral
Green Toadstool Leather (that is pink?)
Duncan
Green Zooanthids (three polyp frag from my boyfriend that has been growing rapidly!)
An unknown Orange zooanthid (another frag from my bf)
Blue Ridge Coral - this one I didn't think was doing anything at all but I've noticed it is encrusting the plug it came on so that's encouraging :)
Galaxia coral - it is isolated but doesn't have as long sweepers as I've seen. Perhaps because it's far enough away from other corals that it doesn't sense them?

Okay so, if I have a fish that shouldn't be in a 10 gallon, does this make my tank overstocked? I have seen other nanos in the 10 gallon range with a bengaii cardinal, and I have one as well. I also keep a bicolor blenny, blue legged hermit crab and two astraea snails, and three feather dusters.

My blenny has a "healthy digestive system" and I tried once picking it out each time I would see it with tweezers or a syringe. But man, his system is REALLY healthy and it just got to be too tedious. So I save it for wc's.

I've been wanting to add another tank mate. A clown mostly. My fear is that as healthy and happy as the two main mates seem now, adding another in such a small tank will lead to something failing or someone kicking the bucket. So I'm waiting. Trying my best to temper my eager purchases and waiting a bit longer until I can properly upgrade to a more suitable tank for a larger community. Every time we go to the LFS, I get that urge to take them all home. Don't we all? 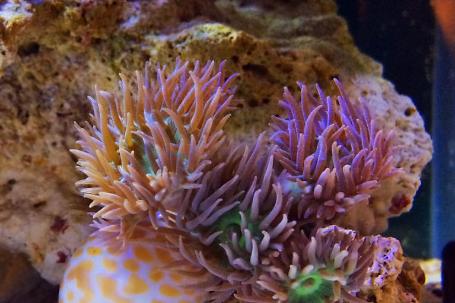 Cleaning
Mag Float
Filter
Fluval Filter
Heater
Aqueon Heater
Lighting
AquaIllumination Nano
Powerhead
Hydor Koralia
I use API's Reef Master Kit and Salifert's Magnesium kit for my testing. I've had nitrate issues but have since kept that in check. Recently, I've been testing 0 in my nitrates so I'm confused on this reading. I keep wondering if my tank has crashed. Am I in a mini cycle? Is this bad?

I searched for this situation and read a few threads and everyone seems to have the same thoughts about the Nitrate solution becoming settled as time goes on. So it was suggested to bang the bottles of solutions hard to break it up. I tried that and still have a 0 reading today. Concerning.

Currently the only thing I dose in my aquarium is Kent Marine Nano Reef A&B. I didn't think anything of it so I stopped using it for a bit. I started testing my water as soon as I started cycling. Earlier today, I was discussing my PH levels with someone and kept saying that my PH is always 8.0 and that according to the online guide I chose to follow, knowing full well it's just a guide, I decided not to buffer my water with the Seachem reef buffer I had on hand. The guide I go by states that 7.8 - 8.5 is okay though, 8.1 - 8.3 is better. So I thought I was okay. However, when I went to check my past testing results, I noticed at one time it was actually 8.2.

I started using the A&B again about three weeks ago and retested my ph this evening. Yup, it's back at 8.2. The only concern I have is my alkalinity. With this product, it should be between 7-10 dKH which, mine is not.

Sun Corals · Duncans · Brine/Mysid · Varied · Reef Roids
My fish will not take flake food AT ALL. I still try, to no avail. I've also tried putting seaweed sheets in the tank for my blenny. Nope. Tried the Hikari squid as well. They both spit it out.

I started them off on mysid and spirulina baby brine shrimp. That's all they seem to like this day. I want them to have a good varied diet but I haven't had luck with anything else.

Considering using Selcon as a supplement.

I have been extremely diligent about my water changes. During the holidays though, I let my tank go for three weeks. I was scared to see what my parameters had become. But surprisingly, everything was in check. Still, I have gotten back on my routine and cleaning the tank is actually something I rather enjoy doing :)

I change at least once a week but would like to get back to changing twice a week. I always have my water ready to go so it mixes at the most, a week.

Every water change I lightly vacuum my sand bed and brush my rocks with a dedicated brush. I change out 3 gallons of water though if I let it go a week between changes, I change out what seems like six but never looks like more than half of the water volume in the tank. Strange because I keep my tank full so that I know when to top off.

Every other water change I take apart and scrub the heck out of my filter. I get a lot of gunk in there and I have heard that the HOB filters can become nitrate holding areas. Not sure how true that is. But I also don't like the idea of having a nasty filter lol. I run the filter casings under hot water and rinse my media in the siphoned tank water. I started using a Phosphate Removal pad in lieu of the Fluval Poly Foam Pad. Seems to help as my phosphates have dropped to zero.

I clean my front glass almost daily with my mag float though, lately, I seem to be getting more "algae" and I've been cleaning the front glass sometimes twice a day. I thought phosphates an excess nutrients was the cause of algae. Along with light? Hmmmm...

On average you perform a 30% water change every 4 days.

My goal is to ultimately have an SPS tank. I'm more enamored with SPS than softies and LPS though, from what I've learned and have been learning, it will be a long road ahead and a lot of learning and experience to gain before I will attempt that endeavor.

With that in mind, I have become greatly inspired by the nano tanks I've seen on the web from full blown mushroom gardens, to amazing zoa collections, and in awe of varied LPS displays. Waiting is the hardest part.