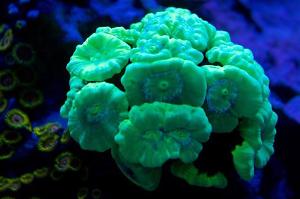 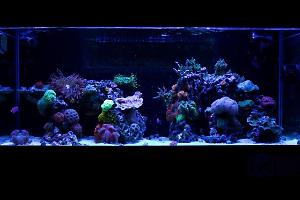 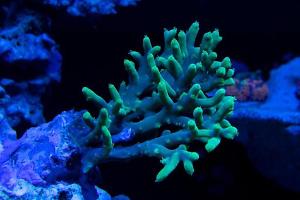 A beananimal overflow with a couple of filter socks handles most of the filtration with a 900GPH Eheim return pump going through 3/4" return lines. I started the system with a Reef Octopus NWB-150, tried a Bubble Magus Curve5 and then finally got a Vertex Omega 130 and haven't looked back. The Vertex was best suited to my tank bioload and has easily been the best skimmer ive ever had. Setting it in the correct water height and adjusting the volute correctly was important to get it dialled in, but now that its set, it's a real work horse! 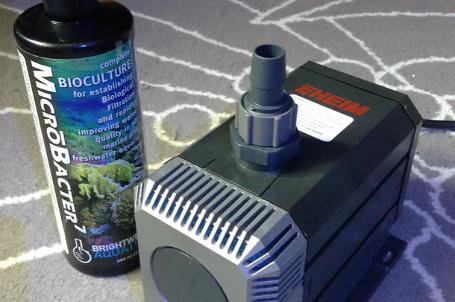 I initially started this tank with 150w K2 Viper Halide lamps that I retrofitted into a canopy contained fixture with 4 x 48w T5's to run actinic and blue plus bulbs from ATI. The halide ran for under 6 hours a day due to heat concerns but the colours I got on my SPS were incredible. The power drain and heat with this setup was considerable so I switched over to 2 x Kessil A360WE LED lamps and kept the T5's on during the transition. The Kesssil's are great lights, but I lost a lot of colour in my SPS as I transitioned the T5's out and the Kessil's took over. I blame this on the spread of the light and my power adjustements/settings not the lights themselves. Corals take longer to acclimate to LED's IME and a gently transition can make a big difference to success long term. 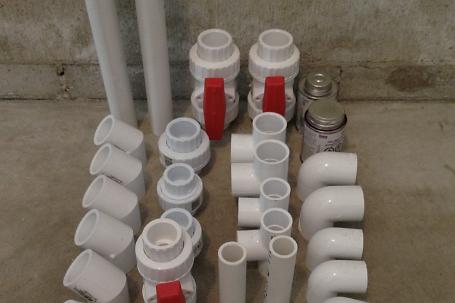 I've faced a few challenges that were unexpected over the years, nothing too major but definitely worth noting. The first was when I changed my powerhead from 2 x Tunze 6095's to a single MP40QD. Both worked superbly on the tank, I am equally impressed with both, however the type of flow produced is very different and this caused issues with coral placement. On changing powerheads I had to move several corals to accommodate the new flow pattern and power and actually lost a small euphyllia frag because I didn't move it soon enough.
With flow in mind the second issue I faced was a combination of coral placement and rockscape. I built my rockscape to look the way I wanted it to and then placed corals as I went without considering the current flow (no pun intended). This meant I had turn the MP40 way down to accommodate my coral placements less I blow them off their skeletons. After moving things around, I got it all set and flourishing well but still wasn't totally happy with the way it looked. (im being really fussy here). Ultimately, next time, I'll spend more time thinking about what coral I plan to keep and build a rock structure that accommodates a flow pattern and power suitable for those corals. Lots more planning ahead of coral purchases. 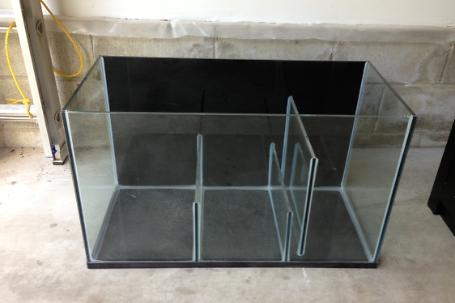 Pellets/ Ghost feeding for cycle · Mysis in a media bag/ to aid cycle · Pellets / Ghost feeding still. No ammonia yet. · Pellets / Ghost feeding heavier now · Polyp Lab Reef-Roids / Ghost feeding everything · Cyclop-eeze / ghosties · Polyp Lab Reef-Roids - LARGE AMOUNT · Daily Feeding: Mix of Pellets, Cyclo-Peeze & Reef Roids
I find a combination of different foods both dry and frozen keeps my fish active and lively. A high quality fish food goes a long way to the health of your fish and i've had great success with Fauna Marin's foods. My fish also go nuts for Cobalt Omni flakes, they just love the stuff. A few clips of TLF seaweed, frozen mysis and a good helping of calanus (usually in the evenings as the corals open up) keeps everyone well fed. 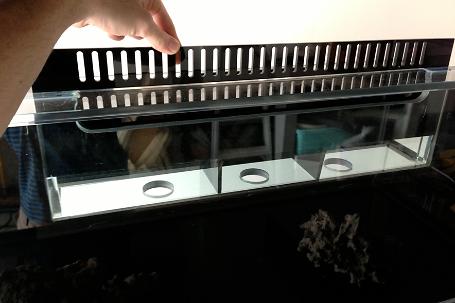 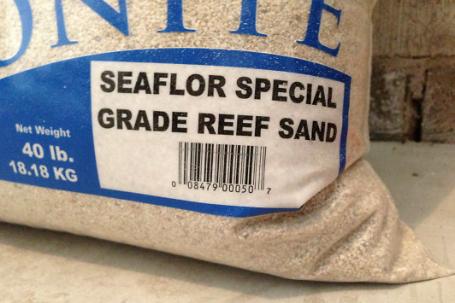 Always remove frag plugs from new corals. Even plugs that are scrubbed with a toothbrush, dipped in coral cleaning and scraped with a scalpel can end up with bubble algae after a few days. Discard frag plugs with extreme prejudice. 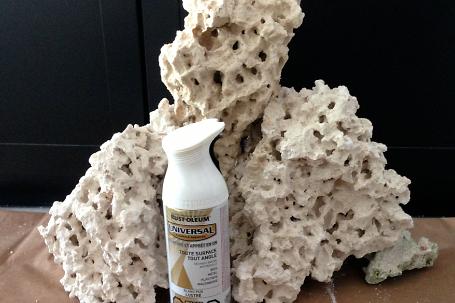 I have run this system for just over 2 years and having experienced both incredible successes and losses alike with varying species of corals and fish. Making the switch from halides to LED's was a tricky one, but definitely one im proud to have succeeded with (acclimation is the key). Earlier this year a dosing line came loose and dropped the alkalinity significantly, this caused a lot of the SPS and chalice in the tank to recede and I eventually lost most of them despite efforts to save them. In the process I learnt a lot about the balance of nutrient levels and alkalinity and continued on with the tank determined to regain it's stability and have things flourish. Needless to say I was pretty devastated to lose so much because of a small hose coming loose. But after several months, the remaining corals finally started to bounce back and growth really took off again! Things are looking great and really growing well now. But the tank is mostly soft corals and LPS now and any SPS added would quickly become overtaken, so im going to redo the tank from scratch, new rock, new equipment etc and start fresh on an SPS dominant tank (with a few zoa's and mushrooms on the lower end) and start a new build thread.
I really want to thank the guys on GTAaquaria for their inspirations and support over the years, especially with Big Reef Depot, I hope that I've been able to be as helpful and supportive as you guys have been to me. The tank will continue here BIG REEF Tank Re-Build Thread: http://www.gtaaquaria.com/forum/show...=46508&page=23 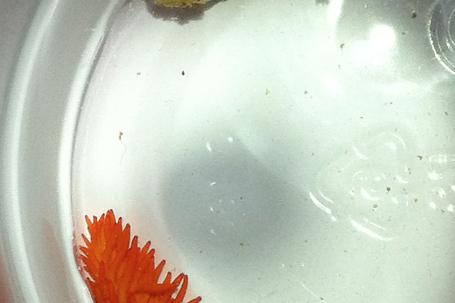