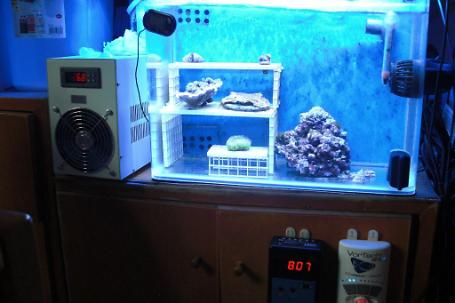 Since I have now moved to Hong Kong, I have been keeping mostly sps in a 24 gallon tank with a 24 gallon sump refugium. Sad to say that it crashed while I was out of town for 4 days for my work and my chiller died which caused the crash in the 35 degree Hong Kong weather. I will slowly rebuild this 24 again. But for now, I have rebuilt my little 11.4 gallon tank as you can see on my profile photo. I built this Frag tank back in 2011 but with the hot weather, it did not last because no mini chillers were available at that time! Now, I that I have found a mini chiller, this little frag tank has been rebuilt and in the process of cycling now.

Keep watching for my updates!

I have been into reef keeping since 1990. My first tank was a 25 gallon fish only tank. You wouldn't believe how many fishes I kept in that tank! I had a Emperor Angel that was the size of a iPad mini, 1 Tomato Clown, 6 Blue Damsels, 1 Picasso Trigger, 1 Koran Angel, 1 Lion Fish, 1 Yellow Tang, 1 Blue Tang, 1 Blue Surgeon and a Cleaner Wrasse! The filtration was a simple Eheim Canister and a old school Protein Skimmer. You know? The ones that uses 2 wooden air stones? I had that tank back in Canada for over 6 years with no losses! Back then, the only better filtration we had was a wet/dry sump and only Calcium Reactors! Which costed you an arm and a leg! No liquid dosing! No live rocks or sand! How we cycled our tanks was by using the liquid bacteria made by Hagen called Cycle. 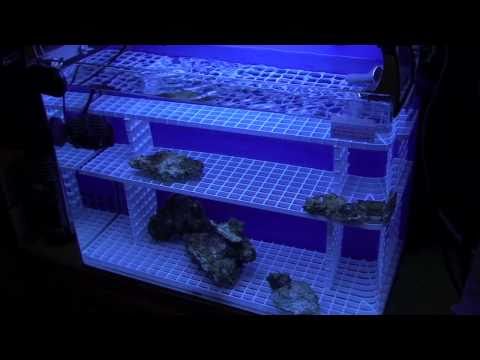 As you can see, I am running this 11.4 gallon frag tank and the filtration is built into the back of the tank. I am just using 2 small pieces of filtration pad in the overflow with a bag of activated carbon in the last chamber and a bunch of old dead coral rubble in the second and third chamber. The skimmer I am using is an old RedSea HOB Prizm which is doing a great job of skimming. It's just hanging between the 2nd chamber of the filter and returning into the third and last chamber which runs back into the tank. As for the Two Little Fishies Phosban Reactor 150, the intake is at the bottom of the overflow chamber and running back into the second chamber where the coral rubble is. Doing a great job of keeping the phosphate and phosphorous level at 0.

Now, I want to talk about the Nitrate. I feed my tank daily with brine shrimp and on each Sunday I feed my tank with brine shrimp, Brightwell Aquatics CoralAmino, Brightwell Aquatics Zooplanktos-S with the occasion of Kent ChromaMax. And I only have 3 Sexy Shrimps, 1 Lawnmower Blenny, 1 Open Brain Coral, 1 Branched Montipora, 1 Montipora Cap, 1 Green Slimer Coral, 1 Chalice Coral, 1 Purple Acropora and 1 Tri-Color Acropora Coral in the tank. The Lawnmower Blenny doesn't eat the brine shrimp at all, and only the 3 little Sexy Shrimps and a Open Brain Coral are feeding on it. With the way I am feeding these guy's, my Nitrate levels should be spiking out of control. I'm sure most of you already know that by now! However, as you can also see. My Nitrate levels are at 0. Why is that?

Well, I'm also running a old Aqua Light Sulphur Denitrator which is rated for a 150 gallon tank. I bought this denitrator about 5 years ago which if I remember correctly costed around HKD$250. I have this set up with the intake in the first chamber and output into the second chamber with about 1 drop per second. I can tell you that this thing works great for my tank! Absolute 0 Nitrate! Everyone is running Bio Pellets nowadays to get rid of Nitrate and I'm still running this old school denitrator! Hey! If it works? Why not use it instead of blowing your money away just to have new cool looking Bio Pellet reactor! To be honest, looking cool doesn't save you money at all! And anyways, who's going to see it when it's either in the back of the tank or under in the sump area!

So my advice to you is that if you already have some old school filters or reactors. Use it! And don't blow your money away for something that just looks cool and does the same job as the ones you already have!