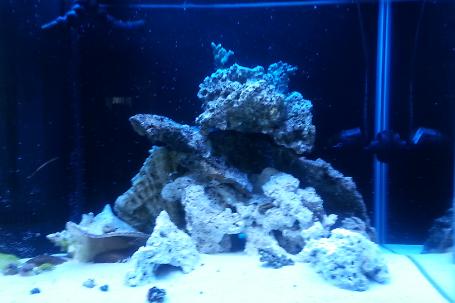 I've been keeping fish tanks since I was a child. Started with small community tanks and kept moving up. I started breeding cichlids in high school; at one point I had a 125G, 3 40B and a 20G all in my basement bedroom. Had to scale back when the humidity messed everything in my parents basement up.

When I moved out and started college I spent about a year without any fish tank and just felt like something was missing in my life. Picked up a 10G from a friend and started playing with low tech plants. I still have that tank and have kept it my low work tanks with some tetras and a pitbull pleco. Although it will be retired in the next few weeks for a 28G bowfront going full planted.

In 2007 I was given a 29G saltwater with some PC lights by a cousin. That was when I got the salt disease. As I finished college that tank never really got the love it needed.

I retired the 29G in 2012 and moved into a 60G with 14G sump. Started really learning the science of salt and trying to grow a full mixed reef. Things were going well until I got a call at work from my roommate. 2/20/14, house flooded, tank cracked, only a few inches of water in the bottom. Rushed home to save what I could. I believe it had been less than an hour since the break by the time I got home. Lost most everything. Managed to save 3 fish, (two of them died a few days later), a few snails, some hermits, some of my favorite mushrooms, a sampling of my zoas, 2 LPS, and one SPS. Miraculously I had just put in a GFCI a week earlier and it tripped, so the house didn't burn down! Otherwise I was back to square one.

Decided this was the time for an upgrade and moved into a 90G with an off-center overflow and a 30g sump. Still rebuilding and working on upgrading parts so that the tank is as bullet proof as possible. Because I never want to go through that kind of crash again!

On average you perform a 4.5% water change every 4 days.