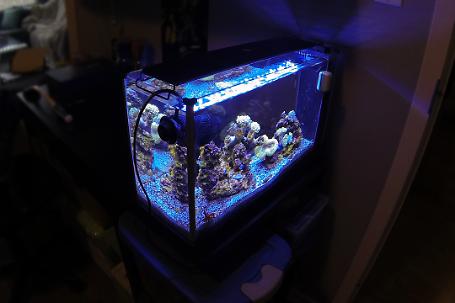 I bought a Fluval Spec V and scraped most of the stock equipment. I liked the idea of the built in 'sump' on such a small tank. It also looks really slick.

I have wanted to start a reef tank for many years now. After the last 5-6 years of cruising forums and reef sites for info I finally decided to dive in... to the shallow end with a small 5g. I am using this to learn more about it as I go. Water, equipment, flow, corals, filtration, lighting was all very daunting. Setting the tank up and knowing what everyone was talking about for real has helped tremendously!

I definitely want to upgrade to a much larger tank at some point. This small tank is a great learning experience even though going smaller is often harder to keep everything in check.

I found a site called inTank and picked up a Mini-Jet 606 to replace the stock pump. I also grabbed a custom Media Basket, Surface Skimmer and 2 Hydor Coralia Nano 240's.

I loaded the media basket with Chemi-Pure, Seachem Purigen and filter floss. The Mini-Jet 606 wasn't actually working well when it arrived so I ended up scraping it and just using the stock pump. I have one of the Hydor's inside for flow so I think it's fine as is.

I use the other Hydor in my salt water mix bucket.

I am very impressed with the Orbit LED fixture. My original plan was to get a Kessil but on such a small, sleek tank I hate the way it hangs there and ruins the lines. The Orbit is so sleek and it fits like a glove. Plus, all the programming you can do and the stock looks like cloud cover and thunder storm are pretty kick ass. The rolling clouds make watching the tank, even an empty tank, more interesting because of the ups and downs of the white to blue.

I know there are better LED setups out there but for the price and look with this tank I think it?s great!

I have a Hydor Coralia Nano 240 inside right now. I am thinking, if it doesn't consume too much space, of adding another to the other side of the tank and adding a pump timer. I try to slide the pump around when I can to stir it up a bit and change the current. I figure this would be a better option.

I am looking into replacing the Hydor's completely and putting in 2 Vortech MP10's on a pump timer. The wet side size is easily half the Hydor's so that would free up some room and clutter from inside the tank.

I have a bit of a crazy plan to build a custom stand so I can install and plumb in a 20g sump underneath it. I know it may be odd to have a 20g sump and a 5g display haha. I have the plans and plumbing already done...it just may take a bit to actually pull the trigger.