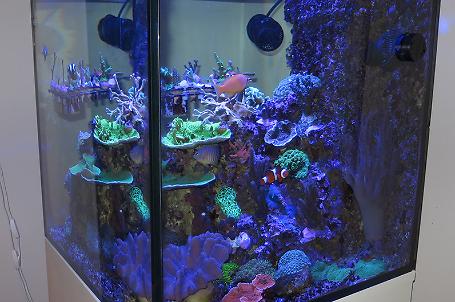 I've been in the marine aquarium hobby for about six years, started with a very large tank that was converted from a fresh water planted tank. During these years I've been mostly keeping fish (FOWLR) and a few hardy coral species, always struggling with the more advanced corals such as sps for various reasons. I got this tank to be able to try out more advanced reefing in a smaller tank.

The aquarium, a White cabinet with a reef cube, 60x60x60 cm, is designed to be a mixed reef, as a supplement to my larger FOWLR tank that I already have. The aquarium is running on a modern version of the Berlin method, ie filtering is handled by live rock and an efficient skimmer, combined with more modern methods of phosphate absorption and dosage of carbon source. The aquarium was bought second hand and was started in December 2013 and is in operation today January 2015).

The aquarium equipment consists mostly of quiet quality products; return pump and skimmer from German Royal Exclusiv, and stream pumps and ATO from Tunze. The aquarium is illuminated with LED ramp from Ecotech.

The aquarium has a DIY sump (50x50x40 cm) below the aquarium. It has 4 sections. One large section for the skimmer, reactors and possible future technology, a little section with a filter pad for mechanical filtration and a compartment for the return pump. The fourth section is separated from the others for ATO osmosis water.

The cabinet is built in 22mm MDF and reinforced with stainless steel details. The bench is screwed, glued and painted white. The lower part of the cabinet holds a sump with all the filter equipment, and is internally sound proofed. The upper part, which is also soundproof hides the lightning and minimizes light scatter outside the aquarium. The equipment has been carefully selected to minimize noise. Fans are provided in both top and bottom for ventilation. The goal is a system that is very quiet and provides minimal light scattering outside the aquarium.

The aquarium is drilled with 3 holes, two pipes down and one pipe up. The overflow is a Herbie type overflow made of 25 mm PVC. The return pump is spec'd for about 2850 l/h and pumps about 2500 l/h with the back pressure. I have put I piece of silicone tubing between the return pump and pipe assembly to prevent vibrations being transmitted from the pump to the tubes.

The aquarium contains about 20 kg of live rock. Reef ceramics covers the background and hides the overflow. The bottom substrate is coral gravel in size 3-5 mm.

The lighting consists of a first generation Ecotech radion XR30w LED. The ramp is 130 W and has five individually controllable colors (white, royal blue 442 nm, blue 468 nm, green 520 nm, hyper red 660 nm). The light is ramped up with blue lights first and then turns into a more white light. In the evening light is faded down to a blue light before the lights finally go out.

A 3 channel master and 4 channel slave dosing pump is used for supplementation. The balling method is used to provide the aquarium with calcium, magnesium, alk and trace elements. Three channels on the Kamoer dosing pump is used for the Balling salts and a fourth channel is used for carbon dosing. The carbon source (vinegar and sugar) keeps the nitrate and phosphate levels low.