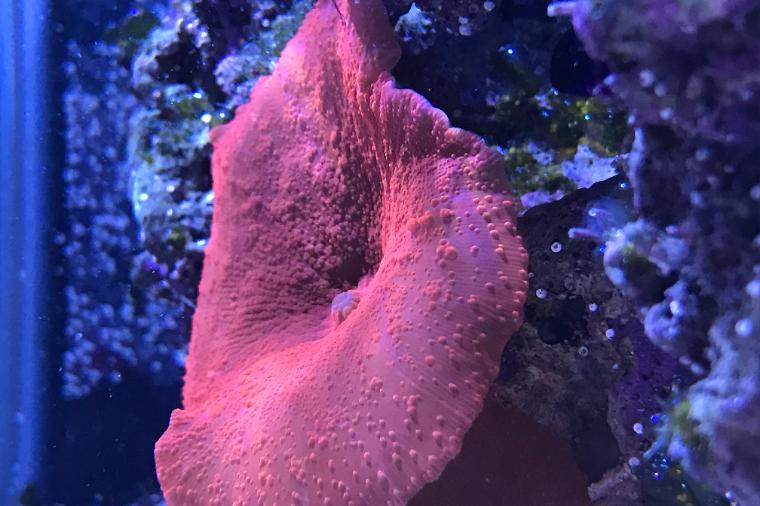 OVERVIEW
The Actinodiscus Mushrooms are also referred to as Mushroom Anemones and Disc Anemones. They were previously in a genus called Discosoma. These invertebrates display a wide variety of colors, textures, and patterns. Some are solid colors, whereas, others are striped or spotted. The red specimens can vary from a light pinkish purple to a vivid red. The taxonomy of the various species is in a state of flux, and will probably continue to change.

They are hardy and moderately easy to maintain. In general, they need a medium light level, and should be placed lower in the aquarium if the light intensity is high. The Actinodiscus Mushrooms prefer a low to medium water flow within the aquarium, although different species may have different requirements. They are semi-aggressive and require adequate space between themselves and other corals and sessile invertebrates. Each ships as several individual mushrooms attached to several small rocks which are glued to a single rock.

An Actinodiscus Mushrooom receives some of its nutritional requirements through the photosynthesis of the symbiotic algae zooxanthellae which it hosts. It also feeds on other nutrients and particulate matter and benefits from additional food in the form of micro-plankton or brine shrimp fed to each polyp of the colony.
5 years ago
CA
carlonaz 4 years
IC
iczerone2000 4 years
UT
utopianreef 5 years