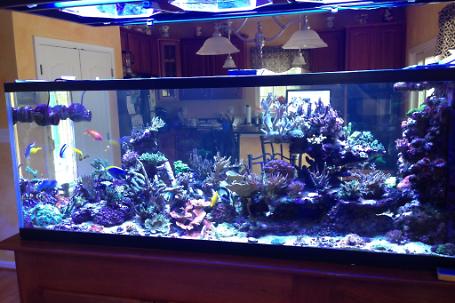 I started in this hobby with a 75 gal fish only system in the early 90's . After a number of years I got the bug to start a reef tank. I turned the 75 into a mixed reef with mostly soft Corals and Zoanthids As the tank matured things were going well and I decided to go to a bigger tank. So I made a stand and bought a new 120 reef ready tank. I loved the new found room! this tank was set up as a peninsula with a basement sump area. I had pretty good success with this set up. I was still a mixed reef, just a lot more corals. A friend of mine from work helped me fill it with new corals from his tank as well as the corals I brought over with me from the 75 gal. I still needed more room. So I embarked on a new project to build a 180 gal reef that I have today.