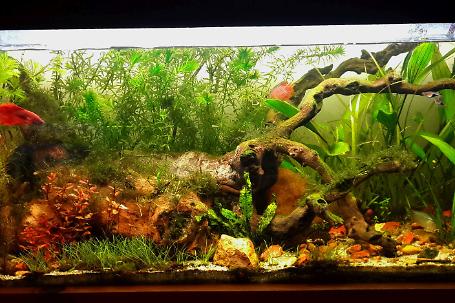 A Southeast Asian Backwater biotope (a recreation of a natural environment) was chosen because these are of the most majestic aquatic environments on the planet - the island of Borneo is home to the oldest rain forest in the world (even older than the Amazon) and, due to its geographical location and bedrock composition (especially high in iron), is home to some of the most spectacular and diverse fish and plants in the world.

Since the beginning of life, all creatures and plants have evolved due to the necessity of survival - feeding habits, breeding habits and seasonal migration; these develop reactively to their surroundings; this is why the creatures from this equatorial jungle island region are so unique in their adaptations (coloration, behavior etc.) - they are living remnants of a time gone by; a time before man and a testament to how, if left untouched, nature will create the most beautiful masterpieces all on its own.

This aquarium aims to recreate this down to the finest detail - a 110 litre slice of life from a time long ago. 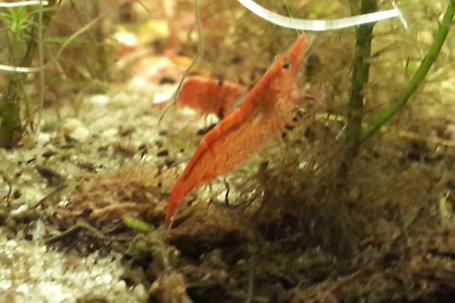 Filtration is done using an external filter to reduce clutter in the tank along with supplemental CO2 injection (self-modified 16g cartridge rig with circulation pump.)

A sandy bottom substrate is used to allow for easy root growth since in order to facilitate carpet-like forests, off-shoots are important. Reddish gravel was added to recreate the soil found in the Asian regions which is typically quite high in iron. Sandy substrate is not the greatest substrate in terms of nutrients though so it is also supplemented with a few tabs of fertilizer (Seachem Flourish) with an extra bit of peat into the filter to help keep the pH on the low side. 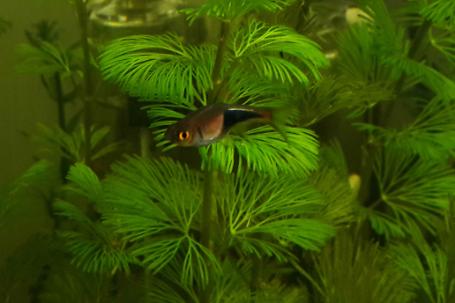 Lighting is quite bright; 2 x 25W LifeGlo tubes are used as Southeast Asian waters are often quite shallow and the leeching from organic material can tint the water over time so the extra light is helpful for plant growth. 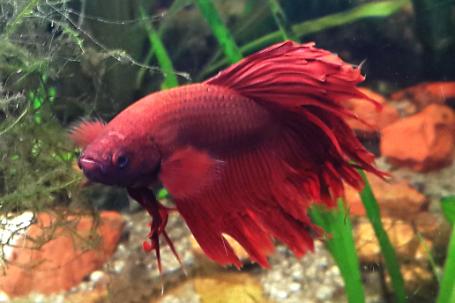 Inhabitants include a Dwarf Gourami, Pearl Gourami's, Siamese Fighting Fish, Rainbow Shark as well as a few Harlequin Rasboras. A pair of Chinese Algae Eaters (the spotty sides - the ones with the lines are Siamese Algae Eaters) which are all too happy to keep excess algae off the top-level plant leaves. Additionally, a few Red Cherry Shrimp and Ghost Shrimp were added to keep the more inaccessible parts of the tank clean (dense foliage areas give them hiding spots).

The major attraction of this tank is the flexibility of choosing tankmates - typically you would shy away from putting Gouramis and Bettas together but since these fish are sourced from the same home environments and attention is put into creating areas in the tank which allow the fish to be more comfortable, you find that they end up reaching a peaceful equilibrium.

For example, Bettas tend to be fin-nippers but also are susceptible to getting nipped, however Bettas are known to be territorial and the reason for this is that they are actually pretty peaceful as long as they have somewhere to call home; the Blyxa and Radican Swords with their relatively large yet unobstructive leaves (Bettas' fins tend to snag on spiky leaves) give them a place to hang out when they're feeling a little flustered - they only get aggressive when other fish come into their territory; after some tense first days the fish in the tank quickly learn their respective places and end up having a respectable relationship with each other - the beauty of it is that it is rare to see these fish happy together, but it works because if you recreate nature, it takes care of the rest.

The backdrop is achieved using the dense and fast-growing Anacharis. A tall forest of Cabomba is located in the back left corner to create a cliff face effect which hides the tank equipment and discourages fish from venturing too far to the back. The Blyxa, Valli and Radicans create a protected, but free-flowing area on the right with an open space where food can be added in a localized region (using a feeding ring) for easy cleaning later as well as to provide an area for fish to scavenge and swim freely.

The driftwood was pre-soaked (for negative buoyancy and to leach out some tannins), boiled (to prevent potential parasites esp. Ich) and carpeted with Java Moss using cotton ties and is arranged so as to create a cascade effect (with the CO2 circulation pump, hidden behind the Cabomba, directing internal flow down the log) from the top left beside the Cabomba down out over the Hairgrass field and out onto the open sandy area. The red Myrio on the left forms an intermediary "kelp forest" effect in front of the Cabomba and serves as a safe haven for smaller fish and shrimp and is accessible via the Hairgrass field so the shrimp can wonder the ground without being harassed. The red Rotala in front of the log bow will be kept trimmed so the shyer bottom-dwelling fish can have a door to their hideout under the wood and also a foraging area. Java Ferns are placed in shaded open areas to add color while not hindering the swimming paths of fish.

The tank is 100% natural and all plants are real and most indigenous (apart from a few species which were for more visual appeal - ie. Red Rotala, Myrio etc.). 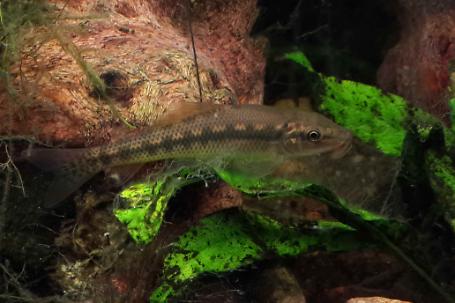 Cleaning
FLUVAL Surface Skimmer
Controller
GLOMAT 30 Watt Elec Ballast (2 channel)
Filter
FLUVAL 206
Heater
ELITE Submersible Heater, 150W
Lighting
2 LIFE-GLO Fluorescent Tubes (x2)
The creeks and streams that are located in the rainforest areas are often invisible from the air due to the dense coverage of vegetation but once found on foot they can be quite a size. As they are often found containing decaying vegetation on the floors of the rivers the water is very acidic and stained, this gives rise to the term Black Water. Even with the very acidic conditions they still provide a home for many species of fish and plants. The pH will normally range from 5.5 - 6.5 and the water is extremely soft (0 - 4 DH is the normal hardness). The temperature of the water is also higher than many other water filled areas ranging from 27 - 29°C. Water movement is also very slow so this needs to be recreated in a biotope for this area.

This aquarium is a recreation of the typical slow-moving waters found in the Borneo/Cambodia regions. These ponds often are quite acidic (around 6.5 pH and therefore have pretty soft water; the reason, however that these waters remain stable is because of a lot of leeching that takes place as water drains from the mineral-rich mountain regions. These minerals increase the buffering capacity of the water and in-turn stabilize the pH (but it also uses up many of the nutrients, hence the softer water).